I've decided to take on yet ANOTHER project.  My un-diagnosed ADHD won't let me work on just one thing for too long.  While I still have tons of Marines to repaint, a Lizardman army to start, Harlequins laughing at me from their box, and some Cygnar Gun Mages (as well as a pair of the new Minutemen Jacks) to finish, my son has convinced me to begin building his army. 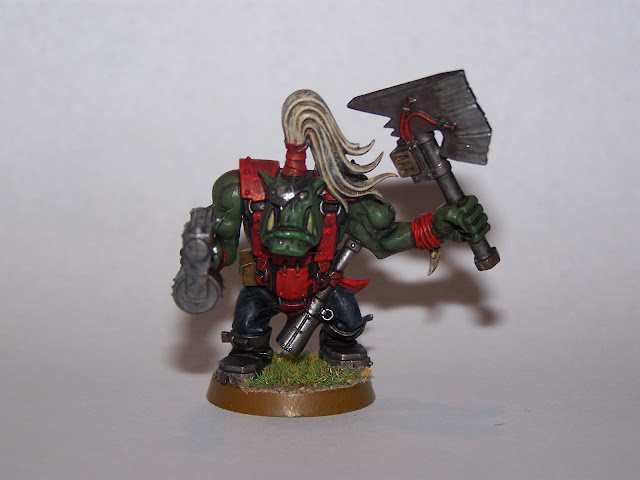 Say hello to Nobby the Nob.  That's right!  I'm going green!  After talking to him at some length (with our best Orky accents), Oscar and I have decided to build an Evil Sunz mob.  Speed Freaks on bikes will form the core of the army, but the occasional Killa Kan and Dred will show up.  Who can pass them up?  They are some of the coolest kits GW has ever produced.  Nobby here is my test model.  I figure by the time he is old enough to play the game, I'll have quite a large force assembled for him.  What do you think?  Is five too young for 40K?

Later
Posted by Cerberus at 4:45 PM