Battle for the Candidus Callipus

Prince Yriel looked out across the bridge of the Candidus Callipus at the small strike force he had assembled.  The fight to the fire control station had been far too easy for his comfort.  The soft Mon Keigh manning the Hulk’s massive orbital batteries were no match for the silently whirring blades of the Striking Scorpion attachment he had tasked with leading the assault.  Within minutes his raiders would have the guns firing on the surface of Reth into the Imperial forces armored brigades massed outside the city of Caul.  Usually not one to give in to the intuition of others, Farseer Eth’El Ret was seldom wrong in his visions and Yriel had come to trust his judgment in such matters.  When Eth’El Ret told him it was crucial that the guns keep firing on the planet at all costs, Yriel chose not to tempt fate.  The rest of the Candidus Callipus would be ignored and the bridge would be held.
“They are coming,” the Seer whispered to Yriel.  Seconds later, the echoing cacophony of massively armored Terminators storming through the halls of the ship began.  Silently, his warriors readied their weapons and moved into position.  The Dire Avengers would hold the bridge itself as long as possible while the Scorpions and Banshees took up positions at either entrance.  The Fire Dragons, their Fusion guns ideal for cutting through even the thickly armored Marines, took up position on the observation deck overlooking the fire control station.  With a silent grace belying their size, the pair of Wraithlords Eth’El Ret cryptically requested took firing positions along the narrow hallway from the engine room.  The ripping sound of the Marines cutting through bulkheads in distant chambers seemed to come from everywhere at once.  Gripping the Spear of Twilight tightly in his hands, Yriel joined the Banshees and prepared to give these foul smelling Mon Keigh a true accounting of the might of the Eldar.
Eth’El Ret nearly wept at the carnage on the bridge of the Candidous Callipus.  The brightly colored bodies of the twenty Dire Avengers assigned to man the weapon controls lay broken and bleeding throughout the bridge.  Here and there the dull grey and crimson of the Blood Wolves Terminators that tried to wrest it form them could be seen.  Most had been vaporized by close blasts from the Fire Dragon’s Fusion guns, and others had been literally broken in half by the massive Wraithbone warriors behind him.  Yriel himself was barely clinging to life, the mysterious energies of the Spear of Twilight sustaining him for better or worse.  The Hulk was undoubtedly back under the control of the Mon Keigh.  However, aside from a brief moment where the Marines had broken through the Avenger’s gun-line, the bridge remained in the hands of the Eldar.  Eth’El Ret had learned long ago not to question the purpose the strands of Fate had laid out for him.  He had faith that Fate would not have asked such a high price for nothing.  He might never know the reason for their actions, but he had faith that their actions on Reth were necessary.  Turning towards the escape shuttle attached to the emergency bulkhead, the few surviving Eldar gathered the collected Spirit Stones of their fallen comrades and abandoned the Hulk to its original owners.

I've been finishing my Eldar army as much as possible so they look great on the Space Hulk table in our Apocalypse game today.  This got me thinking; the Eldar Codex is showing its age.  I know it isn't as old as the Necron Codex, but I don't play Necrons, so I can't gripe about them.  I started brainstorming about what I would like to see out of the next Eldar Codex.  here are five things I thought of.  Yes, they are a bit fanboyish, but so what.  This is MY blog.  If you don't like it, write your own.

1. Wave Serpents should be Assault Vehicles.  The Eldar are a highly mobile, close shooting, and assault based army.  Not having transports that Banshees or Harlequins can assault out of doesn't make sense for a "fast" army.

2. Phoenix Lords, Wraithlords, and Wraithguard need Invulnerable saves.  If your average Marine Captain gets a 4++ from an Iron Halo, why cant a Phoenix Lord, an ancient, godlike, immortal warrior have one as well?  Wraithlords and Wraithguard should get a 5++ like Terminators.  They are basically robots.  Their high toughness is great, but Power Weapons can wreck them too easily.  I wouldn't mind paying more for them either.

3.  Phoenix Lords should unlock their Aspect Warriors as Troops or at least make them scoring units.  I LOVE this trend in Codex construction.  Yes, the Aspects need to work together to be effective, but I'm not a power gamer.  I want to field nothing but Striking Scorpions with Karandras at the helm.

4. Give me the rest of the Phoenix Lords.  Shining Spears and Warp Spiders aren't the most popular Aspects, but I am a completist.

5. Bring in some of the Forge World units.  Shadow Spectres, Hornets, and Assault Walkers all would have a place in my army.  An HQ Wraithlord (who unlocks Wraithguard as Troops) would also be welcome with open arms.

One final plea to GW; PLEASE REDESIGN THE JET BIKE MODELS!  The Dark Eldar jet bikes are so sweet looking, I am on the verge of buying a ton of them and making them less evil looking.  The current Eldar bikes are very useful, but they are 3rd edition models.  They look frighteningly out of place in 5th edition.

Last night I hosted the first Solaris VII League meeting at Gamers Sanctuary.  While a few players who will be participating in the league weren't able to make it, I had a few first timers show up for some pick-up Battletech.  The real thing kicks off next Thursday.  Until then, here are some pics from last night's impromptu three-on-three. 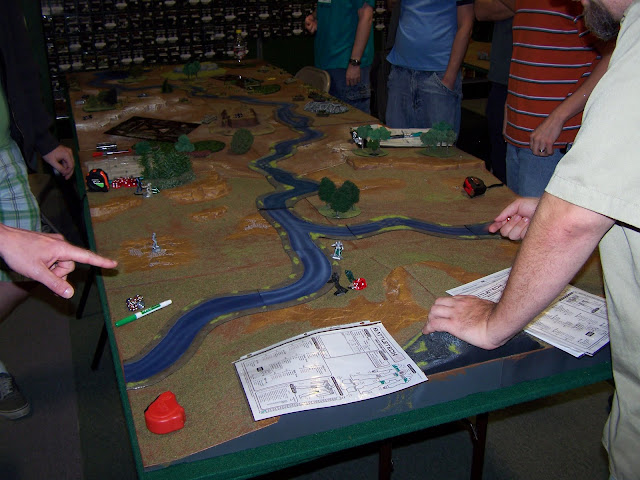 Posted by Cerberus at 6:33 PM No comments:

Here's a quick look at my WIP box.  Some of this stuff has been there for weeks, while others are less than a day old.  I think I have issues closing... 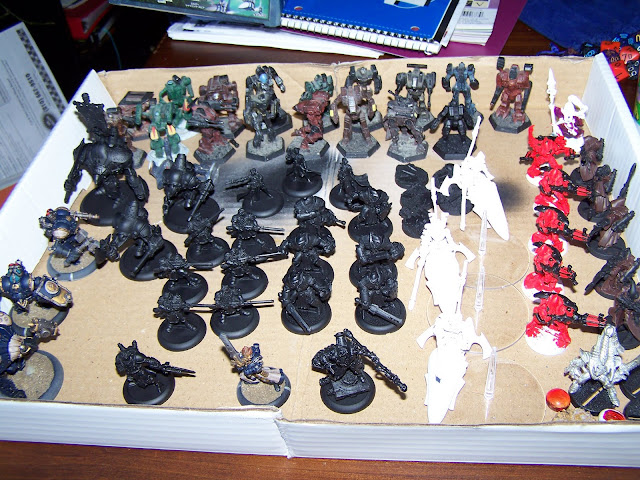 Posted by Cerberus at 7:39 AM No comments: